Our Local and National Videos

Over the years, we’ve been fortunate to help teach, educate and share news about cosmetic surgery trends.

Baby Boomer Blues: What Should A Man Of A ‘Certain Age’ Do When His Face Begins To Sag?

This article is more than 7 years old.

I’m a baby boomer. I’m fit and feel pretty spunky, but there is no defying gravity. My once youthful face had begun to sag (I cringe admitting this) and my eyelids looked heavy. I had that tired look. To compound my concerns, I had developed a snoring problem that drove my teenage daughter nuts when we shared a room when traveling.

With celebrities and reality stars constantly going under the knife, plastic surgerymay seem almost like the norm these days, but is it right for a working stiff facing a nagging but very literal self-image crisis?

So, apparently like many men of a certain age, and with some trepidation, I checked out the various plastic surgery practices in Cincinnati, where I live. I wanted to address both my snoring and facial flaws, so I targeted someone with expertise in both areas. After my research, I ended up in the offices of Jon Mendelsohn, a surgeon certified by both the American Board of Facial Plastic and Reconstructive Surgery and the American Board of Otolaryngology. Trained at Syracuse University, the Cincinnati surgeon now has one of the highest-volume Botox practices in the Midwest and is known as a top shelf facial and body remodeler as well. 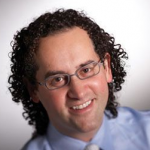 “For years, when it came to plastic surgery, most men said, “It’s not for me,” Dr. Mendelsohn told me. But that’s changed. “I’ve definitely seen more men who, while hesitant, are curious and willing to consider these surgeries. There has been a gradual increase in interest over the past decade, but traffic really picked up after the 2008 financial collapse.”

Plastic surgery procedures in the United States peaked in 2007 at 1.84 million, a number still not eclipsed. “Many of the men who have come to see me since the downturn began said they were pushing off retirement and were frankly worried about job security. ‘Image is important,’” they said. “’What can you do to help?’”

That’s me. But could I risk ending up looking like Kenny Rogers or Bruce Jenner or other plastic surgeries on men gone wrong? Those guys don’t look refreshed; they looked cooked.

Mendelsohn first discussed non-surgical options, like Botox. But for me, with the signs of aging growing, only the knife could address the issues.

For the snoring, he suggested coblation, which is a relatively new treatment that consists of pushing a probe into the soft palate and soft tissue in the nasal passages, removing and reducing the volume of fat by using radiofrequency energy, which is significantly cooler than traditional electrosurgery or lasers. Considering the thousands of dollars I had already dropped at various doctors and dentists who provided no relief, the cost—a few thousand dollars—seemed affordable.

What could I do about my sagging looks? We discussed a range of options, including a facelift, liposuction of my cheeks and lift surgery around my eyes and eyelids. It sounds expensive, and if you live on the coasts or in prime facial surgery regions like West

Palm Beach, Atlanta, Dallas or Chicago, it probably would be—upwards of $25,000. However, in line with many Midwest surgeons, high-end physicians in my hometown, like Mendelssohn, charge around $15,000 for the package, and that could include dot laser treatments to rejuvenate the skin.

The total would be a gulp inducing outlay. But for me, it would also be a once in-a-lifetime expenditure. So, I swallowed hard, and said “yes”.

A few months post surgery, I can say without reservation that it was worth it. As my daughter can attest, the coblation surgery cut my snoring dramatically. You can see for yourself the before and after facial pictures. Maybe they are just trying to flatter, but many people say I look like I’m in my late 40s. That works for me. 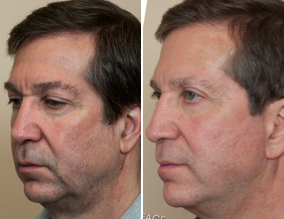 Entine, before and after

The cool thing about plastic surgery at advanced centers is the shortness of the recovery time. While men might need Intravenous sedation for rhinoplasty, for many routine facial and eye adjustments, including lifts and liposuction, oral sedation works fine. I was in a happy daze during my surgery, which lasted about an hour and half. Best of all, because of the induced vasoconstriction, I didn’t bleed out at all. I had my surgery on a Wednesday, and by Sunday I headed out of town to speak at a national convention—remarkable.

Forget the Gucci tie or the Rolex watch; what men of a certain age are hoping for in as their (sometimes dreaded) birthday gift or their Christmas stocking is a square jaw, and their partner who loves them might do best to support him.

“The most common remark we hear from guys post surgery,” say Dr. Mendelsohn, is ‘Why the heck did I wait so long.”

Jon Entine, executive director of the Genetic Literacy Project, is a senior fellow at the Center for Health & Risk Communication and STATS (Statistical Assessment Service) at George Mason University.