Dr. Jon Mendelsohn of Hyde Park and his team at Advanced Cosmetic Surgery & Laser Center hosted their official Studio A Launch Party and benefit. The party was a tremendous success, with more than 300 patients attending, and the Mendelsohn Foundation for the Arts is now within reach of the $10,000 goal set for the Karama Connection, which serves orphaned children in the East African country of Tanzania.

The Karama Connection was founded by Hyde Park resident Connie Naber, who visited the East African country of Tanzania back in 2005 and returned determined to stay connected. She saw firsthand how poverty and across Africa had left so many children without parents due the overwhelming financial burden placed on society in caring for these children. Upon returning she created a non-profit organization known as The Karama Connection to help a group of orphaned and abandoned children, and assure that they were well-cared for, fed and properly educated.

Today, Naber is the proud, adoptive mother of 15 children who reside in a house with a live-in local staff that Connie rents in Arusha, Tanzania. Through her foundation, the children have a home, healthy food, education, medical support, caregivers and loads of love. The current group of kids range from five to eighteen years old. Connie visits twice a year and often brings along some volunteers. When she’s not physically in Arusha she’s often checking in via Skype from her home in Cincinnati — asking about chores, homework, visits to the clinic, and who’s eaten their vegetables. The kids are thriving and the stigma is fading away. 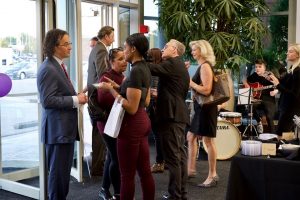 When Dr. Jon Mendelsohn, Medical Director of Advanced Cosmetic Surgery & Laser Center met Connie Naber in 2015, he knew that he wanted to get involved. On June 21, 2016 Mendelsohn, his wife and two teenaged children, traveled to the East African country of Tanzania to meet Connie’s children.

Team Mendelsohn came armed with medical supplies, art projects, t-shirts and other learning materials for the children and were greeted with open arms and lots of hugs and love by both the children and staff.

While in Tanzania, Dr. Mendelsohn performed a successful surgical procedure on the lip of a boy named Muksin who is 15 years old. He was assisted by his wife and daughter, as well as one of the children named Cecelia who has aspirations of becoming a physician one day. Mendelsohn also brought along a pair of green surgical scrubs for each of the children to wear so that they could all show their support for Muksin and the surgical team that day.

In addition to the donation via the launch party, Dr. Mendelsohn has continued to support Connie and the Karama Connection through various fundraising events, including the sale of the framed prints in his office that he took while in Africa.